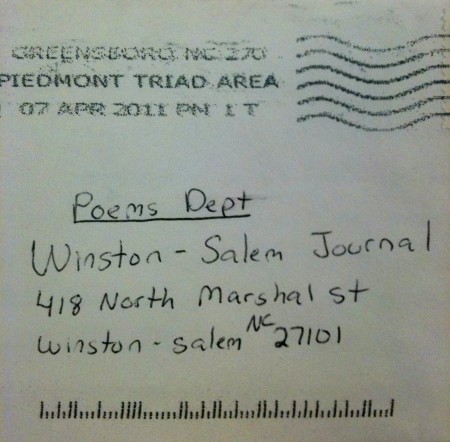 It’s pretty unusual these days to get a hand-addressed envelope delivered to the newsroom. (And much of the time, such letters are what we call “jail mail”, long entreaties from inmates who have nothing but time on their hands to write rambling letters about their cases.) But this is certainly the first letter I’ve seen that is addressed to the Poems Department.
Now, I’m incredibly charmed by this for lots of reasons. One, that there is someone out there who believes that such a department might exist at the newspaper. (I happen to believe quite strongly that we’d all be better off if one did.) And two, that someone cared enough to share his poems with us, written in neat blocky handwriting, on lined notebook paper. At the bottom, he wrote “This is a sample of my poetry, have lots more if you are interested … Would like to write poems for you.”

For the most part, in the age of diminishing column inches and brutal choices about what to put in them, poetry gets left in the dust. There have been some attempts to nurture the relationship. For example, when he was poet laureate, Ted Kooser established the American Life in Poetry project, in which he provides publications with a free weekly commentary and poem. At its inception, about 70 newspapers carried the columns.

In a similar spirit, the Iowa City Press-Citizen embraced poetry as the people’s art form by establishing a regular feature called Poetic License. (As if I needed yet another reason to love Iowa City!)

And how would the news be different if poets wrote the news? That’s a question that the editor of Haaretz asked a couple of years ago, when he invited a group of Israel’s literary stars to report and write the news for one day.

I’m deeply biased toward poetry. It’s long been my practice to read and study poetry, every single day. It offers me an essential counterweight to the soul-numbing grind of the daily news machine, and I try always to keep in mind the words of poet David Tucker (who’s also a top editor at the Newark Star-Ledger): “Journalism is about what the facts tell us. Poetry’s about what the facts don’t tell us.” I’ve been known to stand up in the newsroom and read poems aloud, and distribute photocopied poems on “Poem in Your Pocket” day. (This one.) But perhaps I should also lobby for the creation of a “poems department” at the Journal. Because who says you cannot learn the news from poetry?