Yesterday I escaped the newsroom and the self-imposed prison of my computer and drove up the mountain to do a tape sync for the Radio Netherlands show “Earthbeat.” I love doing tape syncs for radio shows, because I generally get to meet really cool people and get paid to eavesdrop on thoughtful conversations.

My assignment entailed driving into the deep green heart of the Appalachian highlands, far from the four-lane version of U.S. 421 that allows easy access to Boone, with its brewpubs and coffee shops, its powerhouse football teams and fancy wilderness outfitters. I was headed for the Turtle Island Preserve to sit with Eustace Conway, the founder and architect of the preserve. Since the 1980s Eustace has been carving out a place where the natural world, as much as possible, sustains all activity. That means generating their own power, raising (or hunting) their own food, milling the lumber for every building on the place. You might have heard of Eustace, by way of a book called “The Last American Man.” 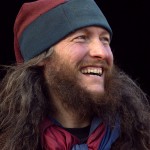 Ted Richardson took this iconic photo of Eustace for the Winston-Salem Journal in 2003. It's now the cover photo of the latest edition of "The Last American Man."

Elizabeth Gilbert wrote it in 2002, long before she ate, prayed and loved her way onto the best-seller list and into the theaters with a film adaptation of her own spiritual journey.

I got turned on to Eustace when my former newspaper colleagues went out to do a story about him, probably tied in some way to Gilbert’s book. Eustace was on yesterday. He had many great things to say, but one spoke particularly to me, as I grapple with my own mortality and my own questions about communication technology and how to use it for good.

“I’ve tried to distill the many, many interwoven problems that our societies have and it’s come down to, after years of searching for a one-word answer … it comes under the umbrella of ‘disconnect,'” he told host Marnie Chesterton. “The healing would be ‘connect.’ To be connected with the natural world. To put your hands on it.”

He went on to talk about communication technology like cell phones, and about the advertisements that tout how the technology promotes connection. “We’re very species-centric,” he said. “The world is a lot bigger than a human being. The human being is like one drop in an ocean. It’s foolish to imagine that it’s all about being connected to human beings. You need to be connected with the rest of the planet. We’re not even allowing in our verbiage or our thought process that it goes way, way, way beyond the human beings.”

I think we would do well to internalize this idea and make it an essential part of our work, whatever is our work.

OCTOBER 21 UPDATE: “Back to the Land” aired this week on Radio Netherlands. It’s worth a listen!