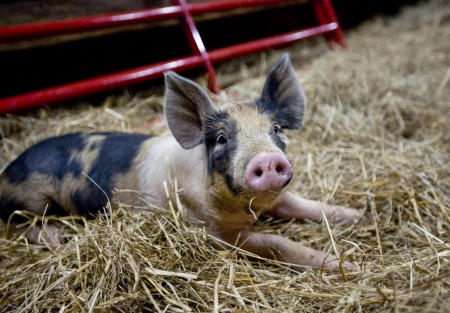 This litle Berkshire pig went on an adventure near my neighborhood last week.

As an online editor, I don’t get to write much for the daily paper anymore, but I haven’t lost my capacity for attracting stories wherever I go.

So the other day, when my friend Jeanne started telling me about the piglet who got loose in Old Salem, providing terrible distraction on the day before a big public event there, I knew that it (the story, that is) had some legs.

I got to the office and went straight to the metro editor’s desk to tell her about the prodigal pig. She loved it. “Who should write that story?” I asked her. We looked around at the newsroom, decimated by layoffs and furloughs. Three reporters hunkered in the corner, hoping we wouldn’t see them. They were busy cranking out copy for the weekend papers.

“Why don’t you make some calls?” she asked.

“Oh come on, Annette, I have work to do, ” I said, sighing. I’m rusty. It’s been about five years since I had a byline.

But once I got to my desk, my curiosity got the best of me, and I started poking around.

I found a cell phone number for the farmer. He rather sheepishly admitted that she had busted out while he was unloading the critters for a TV spot plugging Old Salem’s Harvest Day. As far as he knew, he told me, the little gal was still on the loose, rooting around in back yards and posing a potential distraction to drivers.

A little while later, though, he called to tell me that she’d found her way back to the barn.

But I also had a hunch that it would be the best-read story of the day. We live in hard times, and yeah, there’s a lot of bad news rushing at us all day long. I’ve kept thinking of a line from David Whyte’s poem, “Loaves and Fishes,” which I have posted on my cubicle wall:

“People are hungry,
and one good word
is bread for a thousand.”