Pieces of the Past 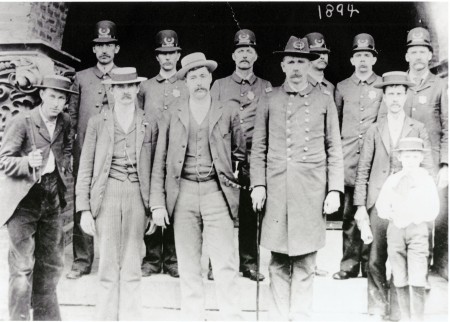 Winston police force in front of the Winston Town Hall, 1894.

Once again, I’m a lucky story magnet. A week or two ago, I was walking through the park with Bunny Snowflake the terrorist retriever and I saw my neighbor Bill Brake playing with his girls on the swing set.

“Hey,” he called out to me. “David Gall called me the other day, said he had something I should come take a look at.”

Turns out that David had found a piece of the old Winston Town Hall, a short-lived but beautiful building where the Reynolds Building now stands in Winston-Salem. David and some other volunteers had been cleaning up at the Happy Hill cemetery, in an old African-American neighborhood in Winston-Salem, when they unearthed a marvelous piece of terra cotta molding.

A couple of days later I went by David’s office. Right away I knew it was a story, especially given that a) it was a mystery as to how pieces of the old town hall ended up in an overgrown and essentially forgotten African American cemetery, and b) that it had been found just before the anniversary of the merging of Winston and Salem, two towns with very different but intertwined and inseparable stories.

Lucky me. Those who run the paper still see it fit to let me write once in a while. The story appeared in Sunday’s edition.