Meeting the Neighbors, Episode One: The Broomsman 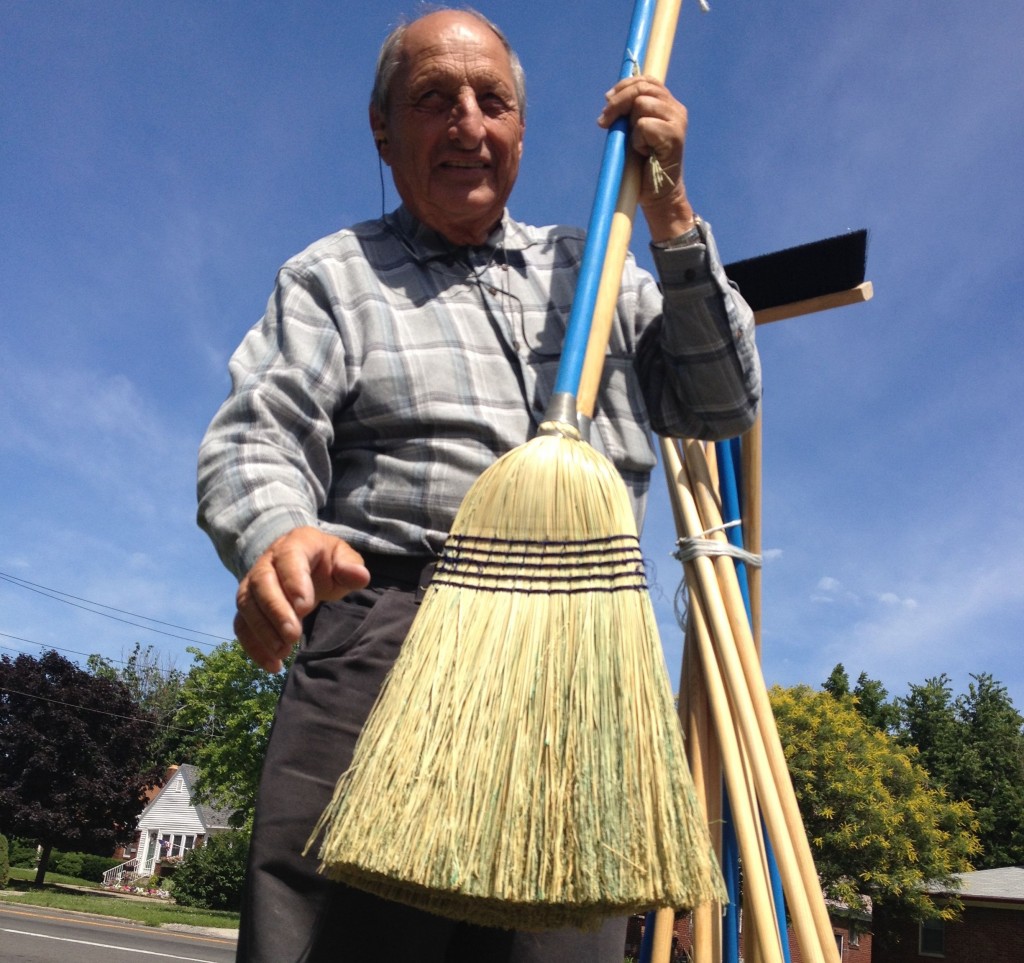 Listen to this story. Seriously. It’s even better than reading.

At the corner of 10th and Ritter, Jim Richter has a corner on his vanishing little corner of the market.

He’s 77, and he learned to make brooms in high school, at the Indiana School for the Blind and Visually Impaired. In those days, blind people learned handcrafts like chair caning and basket weaving and piano tuning. After graduation, Richter says, he applied for upwards of 200 jobs, and in every single case, employers said ‘you’re a nice guy, but …’

At first, Richter sold his brooms door-to-door, but eventually he figured out that people would come to him.

“That looks good in your hand,” he’ll say as he gives you a broom from the teepee-shaped bundle he has tied up neatly beside his folding metal chair.

A guy in a copper-penny Cutlass convertible, big as a Chris Craft, honks as the car floats around the corner and into the stream of traffic on 10th Street. “You know that guy?” I ask, and describe the car.

“Son of a gun, what’s he doing over here?” Richter says, and he laughs the kind of laugh that makes me want to hang out with him all day. “Usually he’s up on the north side. You never know who you’re going to see out here.

Richter gets around, selling at corners and post offices one all over town, and he may be the last guy in Indiana who still makes a living in this old-timey way. To hear him tell it, brooms — and broom corn — were once big here. These days, Texas grows most of the broom corn, he says, and he imports his wares from a sheltered workshop in Alabama.

An older couple pulls over and asks Richter about his brooms. He rattles off the prices, and the woman asks him: “Do you make them?”

“Not anymore,” he says. “I used to, but I have a full-time job just selling them now.” They thank him, and walk back to their car.

“As long as there’s a market for brooms, I’m gonna sell ‘em,” Richter says. “People say ‘Well, you know we see you out here in all kinds of weather and all that, how do you do that?'” I say, “Well, does the Walmart close every time it rains or snows? If you’ve got a good product, and you’re doing a good job of selling it, there are people out there to buy it.”